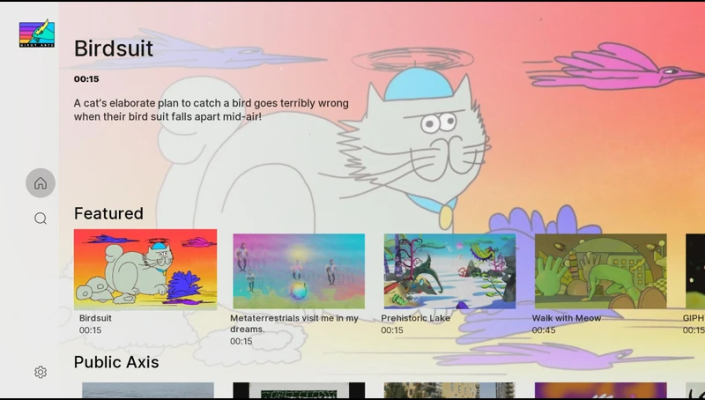 The new “Public Axis” channel is Giphy’s first app for connected TVs and brings short-form video content made by artists from mobile to the TV screen. It arrives on the same day that YouTube introduced its own plan to bring short-form video to TV viewers to challenge TikTok.

Users have access to various shorts, clips or “episodes” made by a commissioned artist. For instance, ListenMi released a three-episode series, “Remote Work Tales,” that feature relatable animated shorts about the work-from-home experience.

Viewers can also check out Public Axis content on publicaxis.giphy.com.

GIPHY Arts launched the Public Axis app on Roku devices to help promote artists to “an even broader audience,” the company wrote in its blog. Roku reported a net add of 2.3 million active accounts for the third quarter, bringing the total to 65.4 million.

Roku, meanwhile, has recently embraced the short-form video trend, as well. The streaming media platform rolled out a new short-form video feature, “The Buzz,” to give users access to short content like trailers, interviews and images from AMC+, Apple TV+, BET+, SHOWTIME, Starz, and other partners.

Giphy has been in the short-form video space a bit longer. It made its first step into this market in 2019 when it launched “GIPHY Video,” which has since been renamed “GIPHY Clips.” Today’s announcement comes eight months after TikTok integrated GIPHY Clips into the new TikTok Library, an in-app creation tool.